6 Things To Gloss Over When Writing An Historical Novel: Pongs, Pests and People & Practises

Whilst a big fan of historical accuracy and realism in my reading material, some things are unequivocally better dealt with today than they were in the past. How did people cope without our modern methods and solutions? I know that in most instances people wouldn’t have known any different but when writing an historical novel, particularly a romance, they do need to be considered for fear of eternally offending and/or disgusting your modern reader. A fantasy can cease to become a fantasy if we dwell on any of the below in too much detail in a novel. Which leads to perhaps presenting the issue in a slightly more appealing or generous light, if not downright glossing over it altogether…

So here’s my first post on this theme where I’ve gone for the myriad unpleasant aromas in a time without Air Wick. In the 17th and 18th century, the rich went about with nosegays and pomanders to combat the many pungent street smells (and I really don’t blame them). 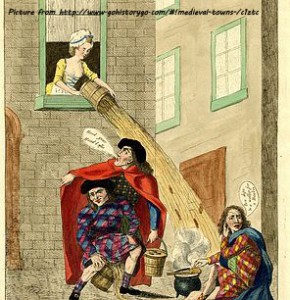 Are there any other delightful smells I’ve forgotten?

© This blog is an original rambling of Eleanor Small

Do get in touch

Made with by Wyke Print Solutions. All rights Reserved.

By continuing to use the site, you agree to the use of cookies. more information